I have installed my own video mirrors on my Scion xA, and it has reduced my frontal area by ~62 sq. in., and I will be doing another coast down test to see how much it may have helped lower my Cd.  I did one set of coast down tests and I got ~0.267 (down from 0.31 of the stock car); though this is based on an estimated rolling resistance of 0.011 for my 44PSI Yokohama Avid tires.

Video Mirrors in action!
Now that I've driven with the video mirrors for a few days now, and I'm close to being used to their location. I drove in the heavy rain yesterday -- and they work much better than optical mirrors! The lower resolution "misses" much of the mist (kicked up from the tires) and their aperture adjustment makes the images on the screens quite bright. Ditto for dusk operation. I have not driven at night except once, and I think I now have the windshield reflection issue solved...(see the picture below for the current set up, that eliminates the reflection)
If I were to design this from scratch, I would say that a slightly less wide angle of view would be plenty (90-100 degrees instead of the ~110 degrees these cameras provide). The wide angle is great and I love being able to see a bit of the side of my car in both screens, but frankly, it takes getting used to. And that leads me to my next improvement:
I would want the lens optics to compensate for the barrel distortion (and maybe overcompensate?) so the cars behind in the adjacent lanes were shown larger and appeared to be closer. I am still looking over my shoulder to confirm that I have room (which is probably wise in any situation!), because they look pretty small when they are ~100' behind me.
Large (semi) trucks behind me show up in all three mirrors! And the way they work in the rain is quite impressive -- the lens get a few drops when the car is parked, which show up as soft-focus distortions on part of the screen, but if you wipe these off, then they stay dry when you are driving. It doesn't matter if your windows get fogged up, either!
I averaged (just) above 50mpg on a tank, for the first time!  The passenger side was put on about 1/3 through the tank, and the driver side about 2/3 through -- not too bad, if I say so myself.
Here's some pictures of what the video mirrors look like at dusk and near dark -- it's a little tricky getting an exposure that shows it close to what I can actually see!

Video mirrors at nearly dark
These are getting progressively darker top to bottom -- the middle one especially makes it look darker outside than it actually is, and the cameras really seem to open up their apertures in this light, and they sometimes are slightly overexposed on one or the other, depending on the direction of the sun.  The last one is sitting in my driveway, and there is very little ambient light -- you can kinda make out the light thrown by my taillights in the right screen...the light ahead is my porch light.
Why did I install video mirrors?  To reduce the aerodynamic drag.  Compare the before and after: 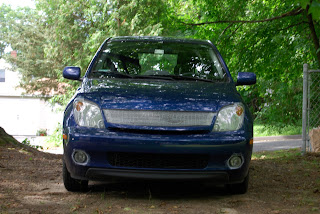 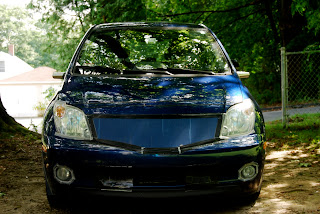