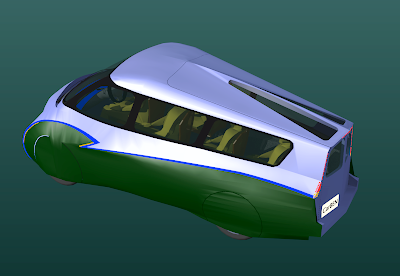 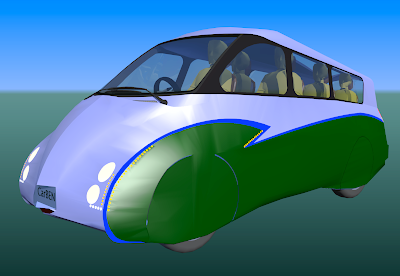 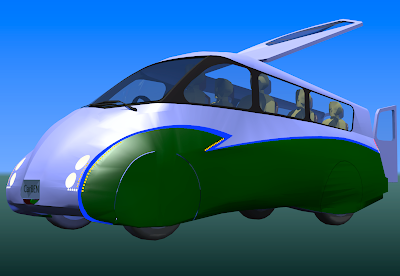 The single entry is probably the most controversial feature of the CarBEN EV -- it has to do with weight savings and surrounding safety structure.

It's not like the the benefits aren't well worth the minor sacrifice: the CarBEN EV could well be the most efficient car yet made, and it could be one of the first electric cars to have a range of 400 miles (or more) on a single charge.  If I was able to take part in the X-Prize, the CarBEN EV would have held the most people of any car in the contest.  It might have a Cd under 0.14 and weigh less than a ton; hopefully less than a ton with the driver onboard.

I'm serious about these goals, and I have to make choices that save weight, while not diminishing safety, and yes, body gaps add aerodynamic drag.  The Bionic increased the Cd from 0.095 (the early blue clay model that I am starting with) up to 0.19.  The main reasons for much of this increase is the uncovered wheels and the cooling for the diesel engine.

Since about 97% of all accidents involve impacts on the front and sides of the car, I want to have maximum protection in those areas.

Since a square encloses the most area with the least perimeter (except for a circle, naturally), it is the best shape to make a car with a given frontal area, and it gets the most usable interior volume.  The Mercedes Bionic/Boxfish model provides an amazing opportunity: it combines an amazingly low coefficient of drag (Cd) in a shape that is nearly a square in the frontal area.  This makes it possible to have comfortable seating for 5 people in a car less than 14 feet long.

These would be unprecedented drag numbers for any car, let alone one that seats up to 5 people.  Having an electric drive train also contributes a lot to this packaging efficiency: the electric motor is much smaller than an equivalent ICE and it's transmission (an electric motor only needs a reduction gear -- or can be direct drive!) and they need just a fraction of the cooling air flow.

And here's one of the reasons where the aero and the aero shape enter into why the entry door is in the back: since truncating the back of the shape (called a Kamm back) makes the vehicle makes it much more practical, and has a very small increase in drag (and the Boxfish model achieves it's staggering Cd of 0.095 with a Kamm back), and this is where a small fraction of the accidents occur anyway, this is where I chose to put the main entry door.

Side doors add weight and reduce the safety; by cutting big holes in the structure (think about a large box beam web) which then has to be reinforced all around the perimeter, and the door itself has to have a similar frame all around the perimeter, and you add the hinges and if you want to have as much strength as possible, you need 2-4 latches (instead of the usual 1).  Adding the latches, means that you gain back some/much of the strength you had with no side doors, but it will weight more.

Since I would need a rear hatch door anyway if I put in a side door; I can save a lot of weight and get the safety protection even better than most cars.

Another aspect of the aero that affects many other things, including the seating arrangement: the tapered shape required for ultra low drag means that conventional rows of seats is not the best way to fit everything in.  Since the electric motor is so compact, the driver can be moved forward between the front wheels, opening up more room.  And the staggered seating means that even more legroom is available by angling your legs off to the side.  So, the CarBEN EV fits 5 comfortably, in a package that most cars fit 4 less comfortably.  The mesh seats are also a big part of this.

On the asymmetrical seating -- basically, the most the weight would be unbalanced is about 300-350 pounds (the two "extra" seats are for shorter adult/kids), and that weight is on the higher part of the road crown; and away from the much rougher right side edge. I've only ever had to replace wheel bearings and the like on the right side of any of my cars. The battery pack in the floor is 800-900 pounds, and since most cars have the driver on the left -- and most often the driver is the only person in the car; so, most of the time the CarBEN will be in total balance! On the other hand, most cars are usually out of balance by up to 250 pounds (or more).

I think I've shown that the choices I've made so far, are aimed at achieving unprecedented ultra-efficiency, in a compact, very practical people moving machine.  Since the most import part of that function is just that: moving people with safety, the small inconveniences of slightly more effort getting in and out of the car are more than offset, if I can get anywhere near the performance I think are possible.  Form follows function, and I think the CarBEN EV can function at a very high level, indeed.

As Oliver Kuttner says: you must get the physics right to get to higher efficiency; and all design choices affect the efficiency. Using less energy is my focus, and that is where I cannot compromise.

After I get a prototype and running, I hope to experiment with rigid wheels and solid (non-inflatable) tires and regenerative shock absorbers.  The solid tires and rigid wheels could be much lighter weight (which counts double to weight losses anywhere else), and they could have vanishingly low rolling resistance, and they would pass along most of the energy to the regenerative shocks; making their effect greater than it would be with conventional tires.

The ride quality could actually be better than with conventional tires, since light wheels makes the system more compliant (they move rather than moving the car), and the suspension can be fully tuned and damped to match the wheels.

This could help get the energy consumption even lower than 100Wh/mile, and that could extend the range, as well as recharging the batteries (a bit) from the energy regained from the shock absorbers (instead of wasting it as heat).  Every little bit counts. 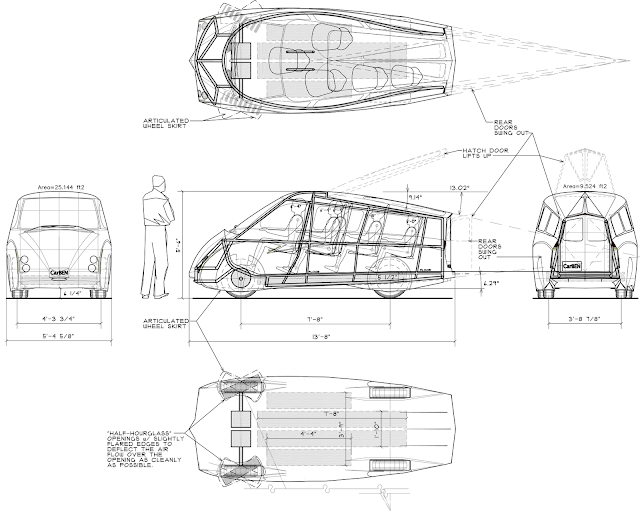 Here are the newest images and of the SketchUp model.  If you want a copy of the model, I'd be happy to email you a copy! 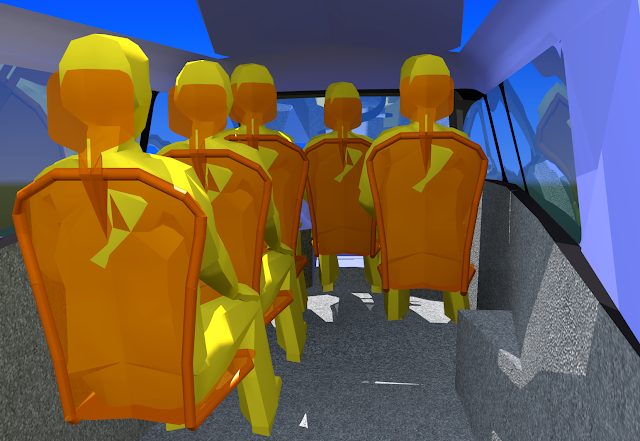 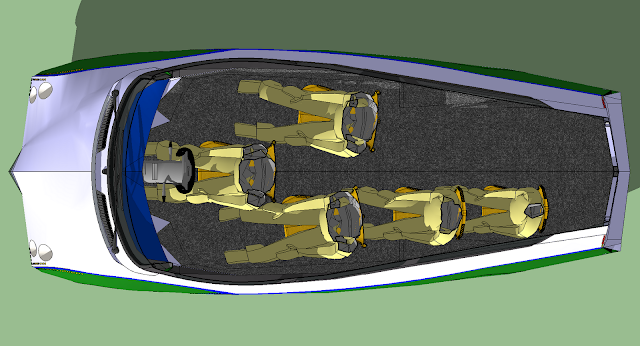 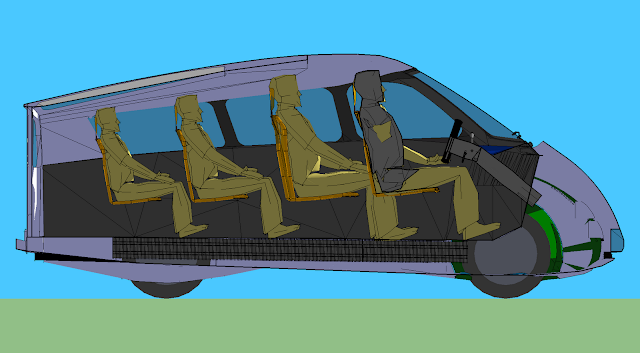 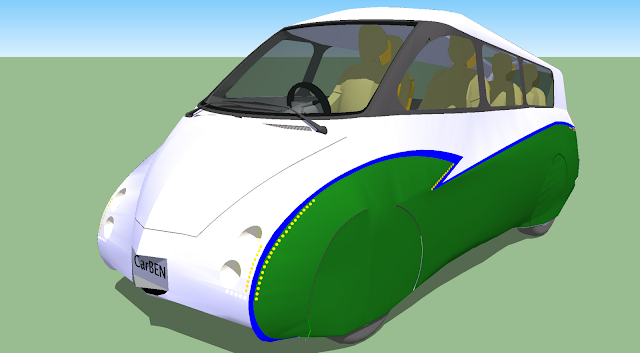 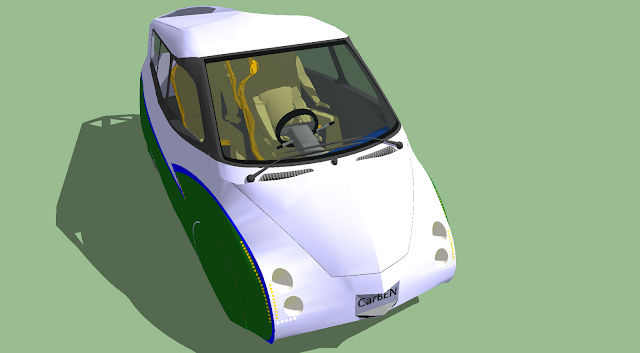 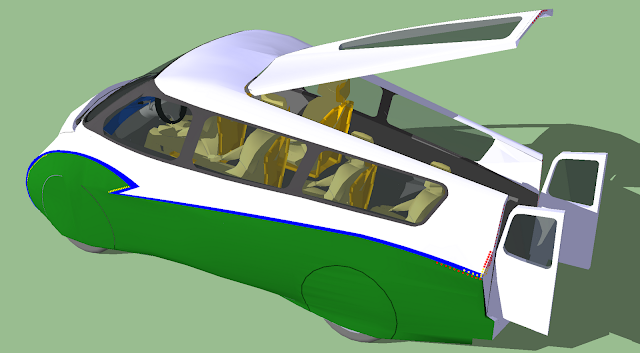 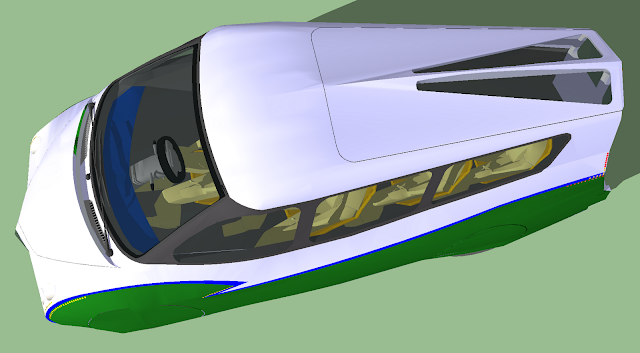 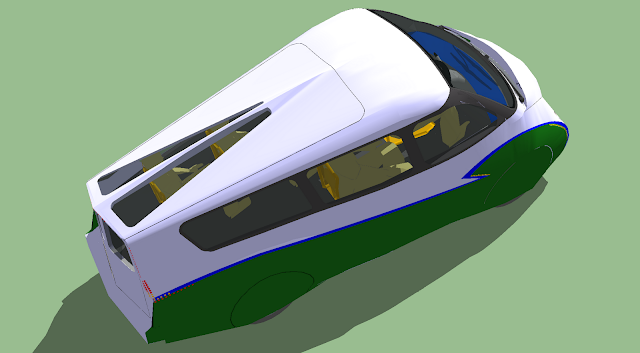 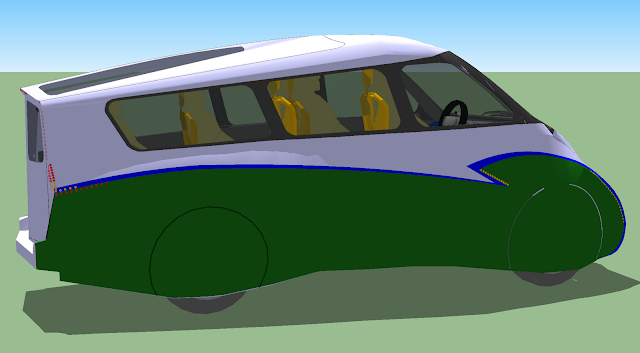 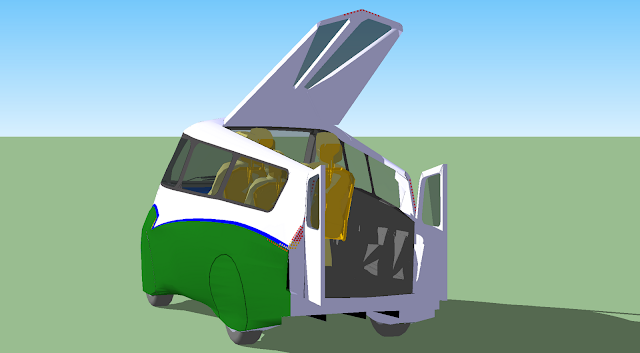 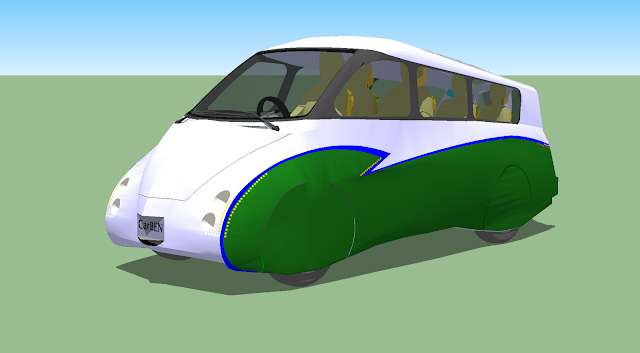 Some pictures of a 1/12th scale (1" = 1') model of the eggcrate frame similar to what could be used to lay the fiberglass shell: 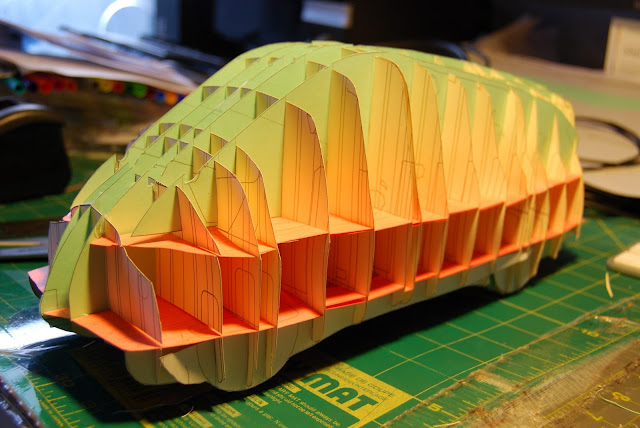 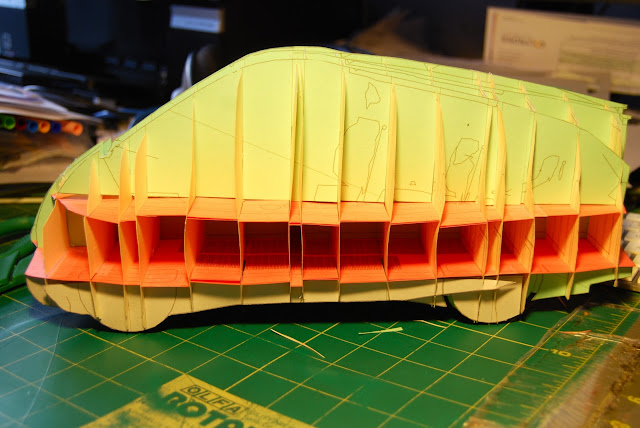 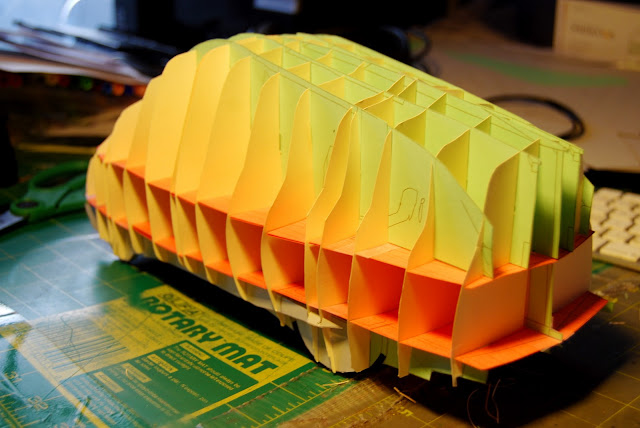