Tar sands is proof of peak oil -- and that should be worrying to anybody who thinks we "have" to have as much oil as we want, and that we have a "right" to use it as quickly as we want to.

So why do we humans of this particular generation -- think somehow that we can use up these finite resources as quickly as we want to?

Renewable energy all come either from the sun -- solar, wind, wave, biofuel; or from the earth's core -- geothermal; or from the moon's gravity -- in the case of tidal energy. And all of these will be here as long as the earth is here -- scientists estimate about a billion more years.
There is a huge abundance of renewable energy, all around us. It is available in an excess -- we only need to gather a tiny fraction of it, to more than meet all our needs.

So, here's where we are at:
We have burned up a huge amount of these finite energy sources in a very brief period of time, leaving very little for all the generations of humans to come.
We have caused global climate change, that is an unavoidable result of releasing the carbon from millions and millions of years back into the atmosphere in about a century.
We have also caused myriad of more localized damage to the earth we depend on to live.

It is totally possible to use renewables for all our needs.  The hardest is certainly flying, but biodiesel is coming along fine.   There is a huge abundance of energy all around us.  And we do not need to "go back to an earlier time" -- electricity and the Internet are here to stay.

Materials for PV panels are (probably) recyclable.  The energy to do this can come from ... renewable sources.  And we don't have to sit still -- there are going to be new and better ways to gather renewable energy.

Enough sunlight energy hits the earth in one hour to power ALL of human needs for one year.  Of course, we cannot gather all of it, so it might take us a week to gather enough energy for the whole year -- and that is just solar energy.  Wind power would take about a month to provide enough energy for an entire year.  Wave power might take a month, as well.  Geothermal energy can be drilled.  Tidal power in places like the Bay of Fundy are truly awesome.  Biogas (methane aka natural gas) can be produced from every sewage treatment plant in existence, and from farm waste (plant and animal), too.

There is way more renewable energy than we could know what to do with.  Energy is the least of our worries.

The true costs of burning oil and coal and gas (and nuclear fission for that matter) are way beyond what we pay for them, in money.   We cannot pay enough to make up for the true costs for these finite energy sources.  They are far more valuable than the cash/money we pay for them.

We will all pay dearly -- but we cannot afford to not transition to renewable energy.  For many reasons, truly renewable energy will be the only energy that be here as long as the earth exists.

Once wind turbines, solar installations, wave power systems -- are installed and producing power, all those jobs are guaranteed to stay local.  The profits from the power produced stays local, too.  Renewable energy is here to stay as long as the earth exists.  And they burn zero fuel and produce no pollution.

The amount of water pollution from the processing the tar sands in staggering.  It will take lots of natural gas to heat the water need to even get the tar separated from the sands, and that gas has to be fracked out of the ground, which uses even more water and causes it's own pollution.

A "growth" economy is by definition going to end. It cannot continue to grow forever, even if we humans figure out how to limit ourselves to ~7 billion.
The inevitable conclusion is that the only thing we can do is use renewable energy, if we want to continue to live as we are, here on this earth. This has been a hard lesson, and we had better pay attention.

Sincerely, Neil
Posted by Neil Blanchard at 3:35 AM 2 comments: 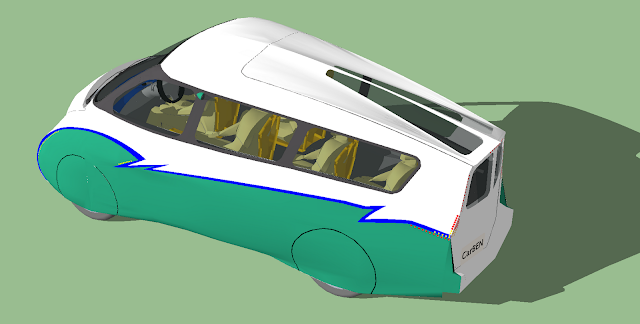 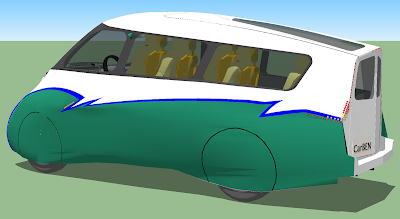 Some new images of the SketchUp model (Mk 3.9) -- I've arched the trailing roofline -- there is 1-2" more headroom in the passengers seats now, and I think the air flow is better, too.  The roof just above the windshield is smoother, too.

I was also considering slightly elongated the front, as well, but I think the aero is better with it as it is?  On the (subtle) styling front, there are now two "hard chines" on the edges of the hatch door, and along with the "spine", the three together balance the three hard chines on the hood and front fenders.

Here's a video animation of the SketchUp model:

I'm working on a 1/4 scale model of CarBEN EV, which I am going to do some aerodynamic tuft testing -- or maybe in a wind tunnel?  If you have any leads on this, I would greatly appreciate it!


I'll be repairing / correcting with epoxy, and then doing tuft testing as soon as possible.  The slot in the front and the gaps in the back in particular, need to be filled in.

The 1/24 scale model (the purple and blue one) is what started it all -- I photographed it and then used these to loft the model in DataCAD X3, and then used that in SketchUp to make a 3D model.  The 1/12th scale egg crate model and the 1/4 scale EPS foam model are generated from the SketchUp 3D computer model I made.  After I do what aero testing as I can on the 1/4 scale model (maybe in a wind tunnel, too?), I will start on a full size shell; using foam ribs, with a 1/4" foam skin and then overlay that with epoxy fiberglass.  At that point, I hope to work with someone, to get it to a working prototype!

If you want me to send you the SketchUp model and/or the CAD drawings, please email me, or comment here, and I'd be happy to send it!